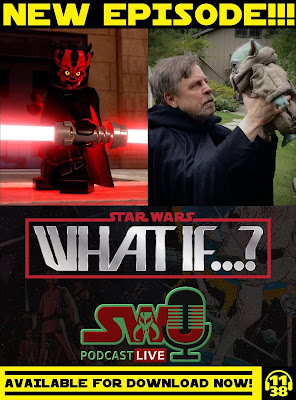 On this episode, Dominic, Ben, and Chris share their thoughts on the latest Star Wars releases, including Disney Gallery: The Mandalorian and the Lego Star Wars trailer.  They start by talking about the new (and long awaited) trailer for Lego Star Wars: The Skywalker Saga, what they thought of it and do they believe that the game will actually arrive on time this time?  Then they review the "Making of the Season Two Finale" episode of Disney Gallery: The Mandalorian.  They talk about the technology used to create the effect, the lengths the crew went to to keep the secret, and Mark Hamill's role in the episode.  Then they talk about some fun Star Wars: What If... ideas.  Plus, the best t-shirt of 2021, #TopHatWatch and #PurpleShirtWatch, and what DLCs could the new Lego Star Wars have?  All this and much more!
Right click here and select save link as to Download MP3.
Support The SWU on PatreonBuy an SWU T-shirtWebsite: www.starwarsunderworld.comFacebook: www.facebook.com/swunderworldTwitter: @TheSWUSubscribe and Review on iTunesEmail: swunderworld@gmail.comVoicemail: 1-410-989-1138
Follow The Star Wars Underworld on Twitter @TheSWU for more updates about this story and other breaking Star Wars news.