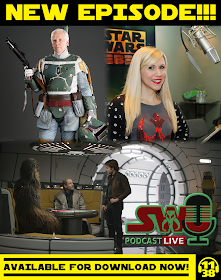 On this episode, Dominic, Ben, and Chris use this slow news week as an opportunity to catch up on some news stories they missed over the past few weeks.  They delve into recent comments by Dave Filoni about his role Star Wars Resistance and some early concepts for Rebels, Simon Pegg weighs in on the state of fandom, and a Star Wars production designer talks about working on Tatooine for a canceled Star Wars spin off.  They also continue their discussion about Solo: A Star Wars Story by breaking down the voyage to Kessel.  Plus, how Ashley Eckstein found out The Clone Wars was coming back, Episode IX filming location rumors, and a Star Wars convention legend retires.  All this and much more!
Right click here and select save link as to Download MP3.
Support The SWU on Patreon
Buy an SWU T-shirt
Website:  www.starwarsunderworld.com
Facebook: www.facebook.com/swunderworld
Twitter: @TheSWU
Subscribe and Review on iTunes
Email: swunderworld@gmail.com
Voicemail: 1-410-989-1138
Listen live Thursdays at 9pm EST on Channel 1138