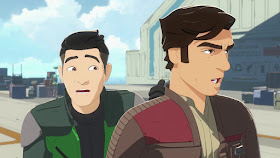 "Can you imagine what it's like to be an ace pilot?"


The first trailer for the upcoming animated series Star Wars Resistance has been released on the official Disney social media platforms.  The trailer is our first look at the art style of the series and lets us hear members of the principle cast in their roles for the first time  Also featured in the trailer is the appearance of Poe Dameron, voiced by Oscar Isaac.  Along with the release of the trailer, Disney has confirmed the rumor that broke last night that the series will premiere on October 7th at 10pm on Disney Channel.   Check it out for yourself below,

The trailer looks pretty good, in my opinion, and I'm definitely intrigued to see more from the series.  The action looks cool, it's fun to see Poe and BB-8 in a different medium, and I am intrigued to learn more about the new characters.  One thing that did stand out to me as a bit odd is that we barely see the First Order in the trailer (there's one shot of what appears to be Catpain Phasma, who will be voiced on the series by Gwendoline Christie).  Since our main hero Kazuda is a spy for the Resistance, I was expecting to see a few more stormtroopers.  But that could just be the trailer and when the series debuts in October we'll see a lot more from the bad guys.

It definitely looks like its targeted at a younger demographic than previous animated series like Star Wars: The Clone Wars or even Star Wars Rebels.  Which is not a bad thing (although it makes the 10pm time slot a weird choice).  With so much Star Wars coming out that is theoretically aimed at an older audience (Jon Favreau's live action series, The Clone Wars, David Benioff and D.B. Weiss' series of films), it's good to have something for younger fans.  And just because something might be made for a younger audience doesn't mean older fans can't enjoy it.  Star Wars, it's worth remembering, is a kids movie and yet lots of adults love and cherish it.

The character that the principle cast will be playing were also revealed in Lucasfilm's press release regarding the trailer.  The cast is as follow

Check out some screenshots from the trailer,