Report: New Look At The Resistance A-Wing From 'The Last Jedi'

For a while now we've know A-Wings will be among the Starfighters that will be showing up in Star Wars: The Last Jedi. The nimble fighters have a long history in the Star Wars saga, having been first introduced in Return Of The Jedi, and more recently have been heavily featured in Star Wars Rebels. Around this time last year some set photos confirmed the presence of A-Wings in Episode VIII, and you can catch some quick glimpses of a few of them in the recently revealed teaser trailer.


Now it looks like we have gotten our best look yet at the new Resistance A-Wing. Recently a listing for a new IncrediBuilds book surfaced on Amazon, which includes a buildable wooden model of the A-Wing. The cover of the book features an almost complete top view of the fighter showing off its similarities and differences from the original version. You can check out the cover below: 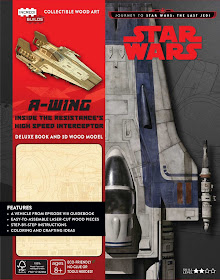 See A-Wings in action once again when Star Wars: The Last Jedi opens in theaters on December 15th!