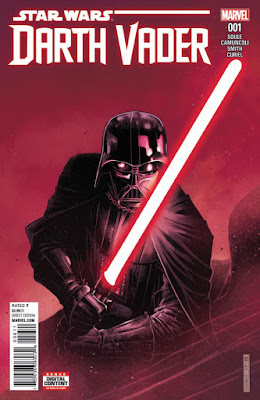 
Marvel has announced a new ongoing Star Wars series about the legendary Sith lord Darth Vader.  The new series will be written by Charles Soule, who has written several Star Wars series for Marvel (including Poe Dameron, Lando, Obi-Wan & Anakin), with art by Giuseppe Camuncoli.  The series will pick up the second Revenge of the Sith ends, with Vader and Palpatine on the bridge of a star destroyer looking at the still in construction Death Star (little do they know it will still take almost twenty years for that thing to be finished).  The first arc of the series will deal with Vader constructing his red lightsaber.

About the series, Soule told IGN,
The first arc is going to revolve around Vader's construction of his red lightsaber, because at the end of Revenge of the Sith, he obviously loses his blue saber when he gets all chopped up and Obi-Wan takes it to eventually give to Luke down the road. So we end up with a character who is known as having this iconic sword, like his magical red sword, but he doesn't have it yet. So what better way to start a big huge series than with a quest for a magic sword?  We're going to explore the mythology around lightsabers to some degree, which will be very fun. I'm really lucky that I get to tell that story. Seems like a big piece of the puzzle for him.”

This is Marvel's second ongoing series about Vader.  The first series was written by Kieron Gillen (who is currently writing the Doctor Aphra series) and followed Vader in the aftermath of the destruction of the first Death Star as he tried to work his way back into the Emperor's favour.  On how his series will be different from the previous one (though both are confusingly titled Star Wars: Darth Vader), Soule told IGN,

“I would say that in Kieron's series, you had a man who had been doing that job and was sort of accustomed to his reality in a way that this Vader is not. So [in this new series] the fire is burning very, very bright in terms of his hatred and anger and the things he's trying to work through. He's trying to understand himself, whereas Vader in Gillen's series was almost sort of an older crocodile that's been around for a long, long time and has no real enemies or challenges. Obviously there were challenges in that book, but this is someone who's very, very sure of his place in the universe and galaxy. It was kind of about topping that a little and taking that away from him and seeing what he did.  Now this is more someone who isn't sure what's going to happen to him. He doesn't know if he's going to be alive in two weeks or 40 years. He doesn't know what his day to day is going to look like and he doesn't know what his purpose is. So it's about trying to understand that, what life without Padme is like, and just kind of understand what it means to be a Sith lord, because all this stuff if new to him. And really exploring the Dark Side in an open way where he doesn't have to be ashamed, doesn't have to hide from the Jedi, can really go deep into it.”

The first issue of the new Star Wars: Darth Vader will hit shelves in June.