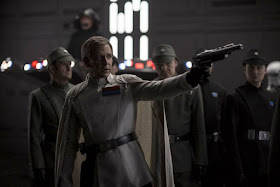 Lucasfilm released several high resolution images from Rogue One: A Star Wars Story today.  Among the pictures released were a couple of new images from scenes that were not actually in the movie.  Not that that's anything new for Rogue One.  The trailers featured several moments that were cut from the film.  Whether or not these scenes were cut due to the highly publicized reshoots the film went through this summer.  There are two images from deleted scenes, one featuring Ben Mendolsohn's Director Orson Krennic pointing a blaster at someone on the Death Star, and the other featuring Jyn Erso (Felicity Jones) having a quiet moment on the rebel base on Yavin IV.  Check them out below, 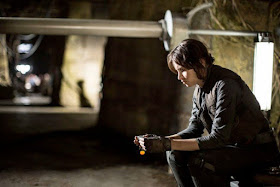 It will be interesting to see how many deleted scenes are actually released when Rogue One hits home media later this year (and then how many more will be released later in the year when the film is inevitably released again on 3D blu-ray).  A recent interview with the Rogue One editors revealed some of the changes that were made in the reshoots.  Based on what was said, they seemed to have largely been focused on character introductions and the film's third act. 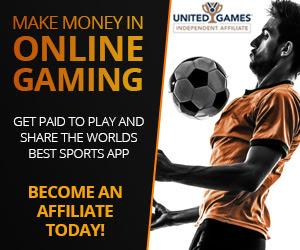