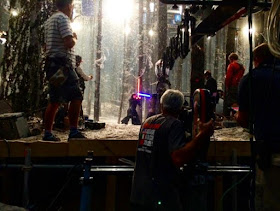 Now that we've all seen The Force Awakens several times, it's time to dive deep into the film and go beyond the big screen. Recently some previously unseen behind the scenes photos from The Force Awakens hit the web courtesy of the film's cinematographer Dan Mindel. Over the past few weeks Mindel has been sharing various pictures from the set on his Instagram. One of his most recent photos has been turning a lot of heads because it is a gives us a look at one of The Force Awakens' final scenes being filmed, in which Kylo Ren(Adam Driver) and Finn(John Boyega) square off in Lightsaber amongst the snowy forests of Starkiller Base. Check it out below:


It's a particularly interesting shot because it reveals that, despite how real the forest setting looked in the film, it was actually a set. Furthermore we see the two actors wielding Lightsabers that are lit up to mimic what appears on screen. This is a technique that we heard was being utilized for The Force Awakens but had yet to see it in use. In previous Star Wars installments actors would normally fight with various carbon and steel rods and the actual Lightsaber blade effects would be added in in post-production. In one instance in Attack Of The Clones George Lucas made use of lighted Lightsabers in the duel between Count Dooku and Anakin Skywalker which would project light onto the actor's faces in darkened scenes. It appears Director J.J. Abrams has brought back this technique for The Force Awakens and helped create the stunning and authentic Lightsaber effects we see in the film.

Be sure to visit Dan Mindel's Instagram for more photos including shots of Chewbacca, BB-8 & much more!