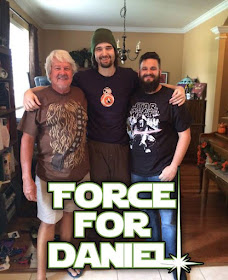 If you've been on the Internet at all over the past week or so you've probably heard about Daniel Fleetwood. Daniel is a life long Star Wars fan, and like everyone these days, he has been anxiously awaiting the release of Star Wars: Episode VII The Force Awakens. Sadly, back in July Daniel was diagnosed with spindle cell sarcoma, which is a rare form of connective tissue cancer, and he was only given two months to live. Since then Daniel has been worried that he may not make it until December when The Force Awakens is released, which led him and his family to begin the "Force For Daniel" campaign. Using the hashtag #ForceForDaniel they reached out to Star Wars fans across the web to help gain the attention of the powers that be at Disney, Lucasfilm and Bad Robot. The campaign gained massive attention across the Internet, even gaining the support of The Force Awakens stars Mark Hamill, Peter Mayhew and John Boyega on Twitter.

Thankfully, just moments ago, Daniel's wife Ashley confirmed via Facebook that Director J.J. Abrams and his team has made Daniel's dream a reality. She wrote:

To all our wonderful supporters, friends, family and awesome strangers: Daniel's final dream was just granted!!! Today the wonderful Disney and Lucasfilms made his final dream come true, in the amazing typical Disney way, they really do make dreams come true! Daniel just finished watching an unedited version of Star Wars: The Force Awakens!!! We would like to thank the awesomely talented J.J. Abrams for calling us yesterday to tell us Daniel was getting his wish granted! We also would like to thank Lynne, Ben and Anahuac for coming to our home and screening the movie for Daniel. Lastly I want to thank ALL the amazing people who helped make this happen, thank you beyond words!!! May the force be with you all ‪#‎forcefordaniel‬ !!!!


This is what makes Star Wars, and especially Star Wars fans, so amazing. Hats off to J.J. Abrams and everyone behind the scenes who made this happen, and major kudos to fans around the world who came rallied around Daniel to help make this happen. Our hearts go out to the Fleetwood family during this extremely difficult time.

If you would like to lend more, much needed support to Daniel and his family, please visit his GoFundMe page!