Rumor: Character and Plot Details From 'The Force Awakens' Leaked 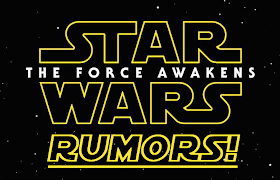 Some potentially major details about the plot and characters have made their way online.  Some are familiar but there are some new ones.  While they don't give away the end of the movie, they do deal with some potentially key moments in the film.  The rumors were posted by Galactic News One, who heard all this from one of their sources.  If you are trying to avoid all spoilers for The Force Awakens, I strongly advise you to stop reading now.  This is your official SPOILER ALERT!
-
--
---
----
-----
------
-------
Here's what Galactic News One has to say about the plot of The Force Awakens,
"The film is dystopian and darker than Empire. Some 30-40 years have passed since Return of the Jedi, and the Empire and New Republic have been locked in a war of attrition. Everyone is languishing and sick of the war. The script, which is described as "too good for JJ Abrams", begins in space, above a desert planet -- presumably Tatooine.

The opening crawl details the ongoing turmoil in the galaxy. How the fall of the Emperor left a void of power, and how the heroes of Endor went into seclusion or kept fighting.

The current state of the war is described as being similar to the European theater of 1944, with the Empire being Germany and the Republic being the Allies. The Republic has finally taken the upper hand.

John Boyega and Daisy Ridley are the male and female leads.

Boyega is a force-sensitive Stormtrooper under command of Gwendoline Christie's character. He defects from the Empire over the course of the movie, ending up stranded on a desert planet (presumed to be Tatooine) during the first act. Having defied orders, Boyega is hunted as a deserter.

Gwendoline Christie portrays an Inquisitor. The Inquisitors are a group of lightsaber wielding individuals that may or may not be force sensitive and head up the Imperial Remnant. Inquisitors aren't Sith, but they are not Jedi either; they are hounds used to track down force sensitives, and they are implied to have assisted Vader's cleansing.

Daisy plays Kira, a character living on Tatooine with Max Von Sydow's character. Kira is a dusty survivalist tomboy. Sydow is a broken man from the prequel area that has become mostly cyborg. He is not force sensitive and for some reason collects artifacts that we've seen at critical points during the previous films, particularly ones relating to the Jedi and the Sith. Daisy shares his fascination with history, and she is revealed in Act II to be the daughter of Han and Leia. As someone with force sensitivity, she resents the fact that Luke went into exile before he could train her, and she hopes that the search for force-sensitive artifacts could lead her to him. She keeps her identity as a Solo under wraps in order to keep trouble away.

Sydow is a sort of mentor to Kira, and apparently his true identity is an Act III revelation that will surprise a lot of people. The contention is that he is an existing character from the prequel films, and the revelation of his identity will shock viewers.

Sydow's character is "not overtly" a villain, but has some sort of Sith connection.

Sydow's "hideout" is a downed AT-AT. Relics of the war are everywhere in the film; there is a real feeling that the entire galaxy is sick of the deadlock.

The blue lightsaber in the above picture is apparently the same one Luke lost on Bespin in Empire.

The ball droid from the trailer belongs to Kira.

On the desert planet (again, presumably Tatooine) Boyega meets up with Daisy and Sydow. At the end of the first act, Han Solo and Chewbacca take them all off planet in the Millennium Falcon. Shortly afterward, we learn that "Kira" is Han and Leia's daughter. Again, she keeps her identity secret to avoid unwanted trouble.

Chewbacca's life debt extends to Han's whole family, and he is now sporting a robotic arm.

Han takes a liking to Boyega. Throughout the film he is in love with Boyega's decision to defy orders and ruin his career in the Imperial military. Han vouches for Boyega, having gone through something similar in his youth.

At some point, Han says the familiar "Hey, it's me!" line. Someone, of course, says the classic "I have a bad feeling about this." These are said to be the only self-referential "smile while rolling your eyes" lines of the film.

Lando is in the script and has apparently become famous.

Luke Skywalker has secluded himself from the galaxy, training only a handful of students since his exile. He fears for his future; as he comes closer to Yoda levels of power, he becomes more and more secluded. There are no Jedi in the open, but rumors persist that Luke has trained a few since the events of Endor.

Lupita Nyong'o is Luke's current apprentice, and Boyega's eventual love interest.
Luke exiled himself because of the ongoing war. With the galaxy in chaos, he had to ensure his safety so that a new generation could be trained. At least, that's his contention; the fact that he continues to exclude himself despite his great power indicates ulterior motive.

Only Han and Leia know where Luke is, a fact we learn aboard a Mon Cal cruiser in the film's second act.

Luke has grown to dislike using his lightsaber, but apparently draws it late in the movie and showcases his abilities against an Inquisitor. It's still green.

Luke speaks to Yoda's force ghost in the film.

Luke has a reveal in the film which, apparently, is stunning.

Leia is the leader of the New Republic. R2D2 and C3PO are with her during the film.

R2D2 and C3PO are the only comic relief characters in the film.

Yavin is in the film, presumably as the Republic's base of operations.

The Republic is building a super weapon on a Scandanavian-esque cold and forsaken forest world. Its ultimate purpose is unknown.

The Han Solo archetype is split between Oscar Isaac and Domhnall Gleeson.

Isaac is an ace pilot with the last name "Darklighter" who's been fighting the Imperial forces for years now. He's a bit of a hot shot.

He inherits the Millennium Falcon and is implied to be Kira's eventual love interest.

Adam Driver's character is an ambitious, force-sensitive pilot who falls to the dark side.

He is described as having a transformation that "only begins" in Episode VII.

He builds his own lightsaber (the one we see in the trailer). It's referred to as a "junk" lightsaber, which is why it looks different from that which we are familiar with.

The decision to give his initial lightsaber a cross-guard was apparently made wholly by the art department.

The lightsaber battles are written by Kasdan to be minimalistic and powerful.

Driver wears a mask because half of his face is cyborg.

He goes looking for Andy Serkis' character on the aforementioned Scandanavian-esque forest world, as we see in the teaser.

Andy Serkis is some kind of alien Sith exempt from the Rule of Two. He is implied to have existed for a long time, be very powerful, and is the speaker in the teaser.

Serkis is implied to have trained or used Palpatine for some obscure purpose.

Adam Driver receives or builds a new lightsaber after meeting with Serkis.

The Sith are not aligned with the Empire. Serkis' goals differ from Palpatine's. Serkis does not play or replace Darth Plagueis.

99.9% of the EU is disregarded. There's very much a sense of the old characters "passing the torch" to the newer characters.


As I said off the top, this reinforces a lot of things we've been hearing (Boyega deserting, Luke in exile, etc.), but I think this is the first we've heard about what Domhall Gleeson and Carrie Fisher are doing and the first time we've heard about Lando being in the movie.  There's lots of interesting stuff in there and overall I like this direction for the film.  That being said, we'll see how much of it comes true on December 18, 2015.