EXCLUSIVE: Star Tours to Get 'The Force Awakens' Expansion 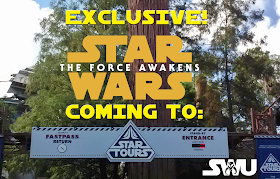 As we revealed on tonight's SWU podcast, we heard from a inside source that the first Star Wars addition coming to the Disney Parks is a Star Wars Episode VII: The Force Awakens portion of the popular Star Tours: The Adventure Continues ride.  Our source revealed that work is being done right now on a new mission that will be added to the ride in the future that directly ties in with The Force Awakens.  Disney CEO Bob Iger confirmed recently that they were looking to have a strong presence from the new films in the planned Star Wars additions to the Disney Parks.

You can listen to our reveal on the Podcast below.  Our discussion about the Disney Parks begins at 23:46 and the reveal is made shortly thereafter,