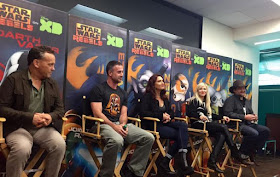 Star Wars Rebels is once again in the news just ahead of the premiere of the hit animated series' second season. Earlier today it was revealed that Sarah Michelle Gellar will be voicing the Seventh Sister, and just a few minutes ago a press conference wrapped which featured Executive Producer Dave Filoni, along with cast members Dee Bradley Baker(Clone Troopers), Freddie Prinze Jr.(Kanan), Vanessa Marshall(Hera) and Ashley Eckstein(Ahsoka) discussing the upcoming season. During the press conference it was announced that a new trailer for season two is slated to be released next week. In addition, the panel revealed several other fascinating details:


Very exciting stuff! I can't wait to see the new trailer, and it sounds like we're finally get to find out where all these characters came from and why they are motivated to fight the Empire. It's definitely something many fans have been hoping to see since the series began.

Season two of Star Wars Rebels will premiere on October 14th with the airing "The Lost Commanders" on Disney XD at 9:30pm! That episode, along with the following one "Relics of the Old Republic", will be screened at New York Comic Con on October 8th ahead of the premiere.