Rumor: 'History Of The Sith' Project In The Works 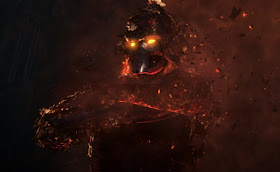 Latino Review is back with another rumor, but this time it isn't about Star Wars Episode VII. They are reporting that a new project is in the works that will focus on the history of the Sith and will draw inspiration from some Legends titles:

"I’ve heard that Disney’s Team Star Wars has spun up development on a project involving the history of the Sith that pulls from elements found previously in Knights of the Old Republic and the Golden Age of the Sith parts of the “Tales of the Jedi” comics series.

This project seems pretty new, or at least in the first stages of revival, so it’s unclear what form this will take: spin-off movie? TV special? Netflix something? Animated whoosit?"

Now that previous books, comics & games that explored this era have been deemed to be Legends, now may be a good time have a canonical retelling of the Sith's history prior to The Phantom Menace. Darth Bane(above), creator of the infamous Rule of two, appeared in the final episode of Star Wars: The Clone Wars(voiced by Mark Hamill). That could be a jumping off point for future storytellers to explore the Sith backstory. And bringing in elements from the very popular Knights Of The Old Republic video games would definitely be a fan pleasing move.

As Latino Review points outs, this could be anything. With multiple stand-alone films and television productions currently in progress, the possibilities are endless. But as always, take this rumor with a grain of salt and wait for official word from Lucasfilm.